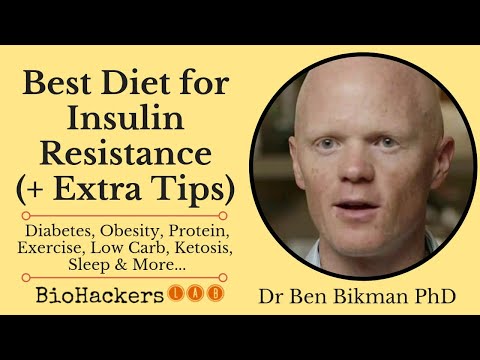 In today’s interview I get to speak with research scientist & expert on metabolic disorders, Dr Benjamin Bikman, about insulin resistance, why it’s so important to know about it and what we can do about it.

In today’s interview we get a chance to talk about what is and how we can test for insulin resistance. Also the best solutions for what we can do in terms of diet, sleep and exercise to help maintain normal insulin levels.

If you know someone who is interested in learning more about insulin resistance, or is suffering from type two diabetes or obesity and wants to know what they can do to help bring their insulin levels back to normal, this interview is for them.

I enjoyed this interview as I have a keen interest in the role our diets and other modifiable lifestyle factors play in so many of the chronic diseases we see today.

After speaking with Ben, I have a better understanding of what I can do to keep my insulin at a healthy level so that I can help prevent so many of the metabolic disorders that are currently on the rise.

Special thanks to Ben for joining me on the show. Enjoy the episode!

[00:20] – Introducing Dr Benjamin Bikman, who has a PhD in Bioenergetics and was a post-doctoral fellow in metabolic disorders at Duke-National University of Singapore. Today his focus is on better understanding chronic modern-day diseases with a special emphasis on the origins and consequences of metabolic disorders.

[01:25] – What is insulin and why is it so important? Insulin is both a small protein and hormone, that is secreted by the beta cells of our pancreas. One of its main jobs is to clear the blood of glucose and usher it to muscle or fat cells (other tissues can do so without insulin). If glucose stays high for too long a person can die from a non-ketotic coma.

[03:31] – We learn more about hormones. When people suffer from weight issues, there seems to be some sort of hormone imbalance involved. A good question to ask ourselves is how does the food we eat influence certain hormones? Hormones decide what the body does with the energy that it has – especially insulin. Insulin stores the energy; the opposite of insulin is glucagon which mobilises the energy. Ben explains how human obesity is more than just calories in and calories out.

[06:40] – What is insulin resistance and why does it matter? The most accurate and simplest way to describe insulin resistance is that it is a state where the cells of the body are responding to insulin in a different way than they used to. Not all cells respond in the same way. There is a spectrum of different responses and while some cells are compromised some continue to work fine.

[09:15] – It is not just fat and muscle cells that can become resistant to insulin. Ben explains how every cell in the body has insulin receptors, each with different responses to insulin. This means insulin affects nerves, blood cells, bones or any other cell in the body. The common theme they all have is that insulin is telling the cell to grow.

[11:21] – Because all cells are affected, we get numerous conditions associated with diabetes such as, retinopathy and neuropathy. However, it is important to emphasise that these conditions are not consequences of glucose. They begin to manifest before glucose levels change because it is, in fact, insulin that is driving the pathologies, not glucose. This is particularly relevant with type 2 diabetes.

[13:18] – Recently a paper was published suggesting diabetes should be classified as five separate types rather than just the two we currently have. Ben agrees and explains why we shouldn’t be lumping them all together. Currently, we are treating the type-one diabetic, who doesn’t have insulin, the same as the type-two diabetic who has elevated insulin. A paradigm shift is needed away from glucose control to focus on insulin control. This would also mean we could detect problems much sooner.

[17:37] – How can we test our insulin levels? Currently, the only way is to ask your doctor to specifically test for insulin levels. It is an easy test and not very expensive. Most physicians are still reluctant to test for insulin as they have been taught to focus on glucose. Ben’s tip is for an at-home test what you can do is to measure your ketones. This is because ketone levels are inversely proportional to insulin. So, if ketones are high, insulin must be low (unless you are drinking exogenous ketones, which will affect the results).

[22:27] – For insulin levels to be low, you do not have to be in nutritional ketosis. The moment the device stops saying low and gives you a number (>0,1 mmol/L) you are in a good place to be and your insulin is in control. We discuss why nutritional ketosis is defined as 0,5 mmol/L , a concept initially put out by Dr Jeff Volek and Dr Stephen Phinney. (Use the Keto Mojo to test blood ketone levels).

[25:57] – We discuss why it is important to be reasonable with what level of ketones is optimal. Ben explains how chasing high ketone levels often leads to people avoiding protein to their detriment. Yes, protein can increase insulin, but it also increases glucagon which counters that. It is important to make sure we are getting one to two grams per kilo of bodyweight of protein to help preserve muscle mass and optimise muscle protein synthesis. We have previously talked to Prof Stuart Phillips about the importance of getting protein right on the ketogenic diet.

[30:06] – Gary recently finished his carnivore diet experiment (see his results and experience on YouTube here) where he ate an all meat diet like Dr Shawn Baker and Amber O’ Hearn.  A lot of people in that community are ketogenic carnivores. Ben explains that even when choosing the fattiest cuts of meat, you are still eating mostly protein, but this is nothing to fear.

[31:34] – Ben explains what insulin and glucagon do in response to dietary protein. A study from Roger Unger’s lab showed that the response is very different in carb fed people vs low carb people. Insulin to glucagon ratio increases 20-fold in high carb individuals whereas there is no change in low carb people. Ben explain why gluconeogenesis is essential to our survival and why we presume it prevents insulin from spiking in low carb people.

[34:14] – Gary’s ketones increased when he was on a strict, all meat diet and so his insulin was probably in better control. Ben’s three-step diet tip: 1. Control the Carbs, 2. Prioritise Proteins, and 3. Fill with Fat.

[36:56] – We discuss one of the reasons why we often make things overly complicated. The low carb and biohacker communities are extremely competent and very well informed. Because of the access to information and the desire to seek the truth, the community is filled with remarkably knowledgeable people. Like Dave Feldman’s cholesterol experiments, it is all about n=1 experimentation. Take a theory, apply it to yourself to test your personal results and see if theory is true in your case – if not, change something to suit your health needs.

[40:03] – We now know that we can have normal sugar levels and still have abnormal insulin levels. For most people insulin resistance is considered clinically silent, partly because there are no obvious indicators early on and partly because we are looking at the wrong indicator. Other than abnormal insulin levels one of the first indicators is usually an increase in blood pressure rather than sugar.

[41:17] – We discuss another common complaint – a feeling of shakiness/jitteriness when not eating carbs. Ben explains how another early indicator of insulin resistance is relative rebound hypoglycemia and how, based on the available clinical data, the best solution is to adopt a low carbohydrate diet. Calorie restriction also lowers insulin levels, but Ben explains why this is not a long-term solution.

[47:35] – One of the benefits of a low carb diet is that it puts your hormones in the same place as fasting, without caloric restriction. That means you can stay in a low-insulin/high-glucagon state without starving your body. Intermittent fasting works and works well, but, it’s just as important what we do after the fast. We also need to be careful we are informed and diligent in terms of how we go about fasting as it could be dangerous if not done correctly. Dr Jason Fung’s is a great source of information on this topic. Ben cautions about the dangers of the re-feeding syndrome and hypokalaemia after fasting, which can be fatal.

[49:51] – Ben recommends people engage in time-restricted eating, which is a safer option to multi-day fasting. Essentially, this means eating all our calories between a certain time period (e.g. within six hours of a 24-hour time period) without restricting the caloric intake. Circadian biologists also talk about timing of meals according to our body clocks. Insulin release also happens according to an inherent circadian diurnal pattern.

[52:45] – A lot of supplements on the market only deal with blood sugar levels and don’t necessarily address the insulin problem. However, there is plenty of evidence to show micro-nutrients, such as magnesium, for example, can help improve insulin sensitivity, but this is only in cases where a person is actually deficient in said micro-nutrient. Our focus should be on the macros, first. If they are in control, the micro-nutrients should then fall into place. Anything beyond that will have a subtle effect, if any.

[55:56] – Are there ever concerns about lowering insulin levels to a point where it is too low? Ben explains that this is not a concern due to the fact that there is always glucose being made in the liver and so there is always enough insulin being made keeping ketogenesis in check. Only when there is a genuine deficiency in insulin, such as the one we see in type one diabetics who don’t produce any insulin at all, is there a fear of ketoacidosis occurring.

[57:53] – Another factor that significantly impacts insulin is sleep. However, every individual is different in terms of the optimal amount of sleep for them. In addition to minimising blue light exposure, Ben advises that the important thing to do is observing good sleep habits such as: winding down in the evening, having a fairly consistent wake-up time, etc. Incredibly, it takes only one day of sleep deficiency for insulin resistance to occur, but the good news is that a good night’s sleep will fix it just as quickly.

[1:02:50] – Three takeaway tips for insulin: diet, sleep, and exercise – in terms of exercise, a study showed that the time right after dinner has the greatest impact. Ben also emphasises that we should challenge ourselves at some point when exercising as intensity matters.