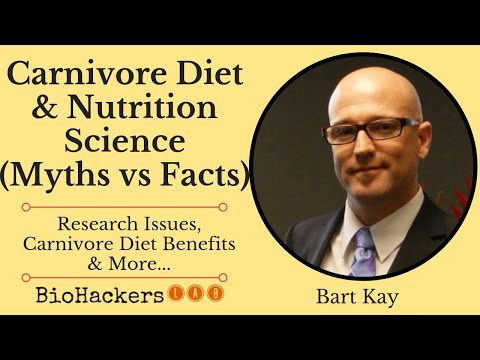 In today’s interview I get to speak with former senior lecturer in clinical physiology, exercise physiology and nutrition, Bart Kay.

We talk about some of the prevailing problems in nutrition science today and why it can be challenging to find reputable nutritional advice.

Bart is very passionate about busting commonly held misconceptions about human physiology and nutrition, and focusing on the real, evidence-based science amongst the mountain of false information.

Bart also talks about the benefits and myths of a carnivore diet, his personal results so far and why he believes it is the best, long-term diet for his own optimal health.

We also get a chance to talk about Bart’s personal experiences in academia and why he chose to leave that world.

Plus, we find out why someone experienced in the science of nutrition would choose to eat a carnivore diet.

I enjoyed this interview with Bart as he shed some light on the ethical challenges to studying human nutrition.

Which, coupled with the influence money has on research results and the common nutritional guidelines we are given,  can make it quite difficult to make sense of all the conflicting information.

The good news is, with more and more people taking matters into their own hands, experimenting with their diets and sharing their own stories, Bart believes the evidence will speak for itself.

Special thanks to Bart for joining me on the show.

Hear episode 79 directly on your favorite podcast app by clicking a link below:

Follow, or find out more about, Bart on these official links:

[00:19] – Introducing, Bart Kay, a former Senior Lecturer in clinical and exercise physiology, nutrition, research methods and statistics. Bart has published a number of peer reviewed articles and book chapters as well as consulted for The New Zealand All Blacks, New Zealand Army and Australian Defence Force.

[01:10] – Bart explains that he doesn’t believe nutrition today is taught the way it should be. Individuals who currently teach nutrition science talk about it being evidence-informed; having investigated this himself he completely disagrees and believes it lacks scientific discipline.

[02:45] – How do we establish cause and effect and why is it so difficult to do so in nutritional science? Bart explains how research ethics prohibit effective scientific studies in this area and a lot of it comes down to inferential guess work vulnerable to abuse.

[05:17] – Are there any obvious myths in nutrition out there? The most pervasive one is the idea that consumption of saturated fat is associated with heart disease/atherosclerosis. Bart explains why this is a nutritional myth.

[08:36] – Bart talks about the influence of money in spreading this kind of misinformation, conflict of interest in research funding and the prevalence of skewed statistical data; when reading scientific papers be aware of adjustment of the data.

[14:14] – Getting the real information out of research papers can be really difficult, but it can also be difficult for researchers to get their papers published. Bart shares his own experience with this and talks about Tim Noakes’ peer review journal where there was no money or sponsorships involved.

[19:18] – After a lifetime of serious health concerns, including digestive disorders, appendicitis, serious mental health issues, pancreatitis, fibromyalgia and more, he cut out carbohydrates and resolved 85% of his issues. Bart explains why going carnivore made sense to him and helped resolve the rest of his health problems. He believes antinutrients, pesticides in plant-based foods etc… affect people (some more than others).

BioHackers Lab Tip: Listen to Mikhaila Peterson and Amber O’ Hearn share the same effect of a benefit on their mental health.

[28:12] – Bart shares his experience as an academic, talks about his refusal of espousing dogma and his resolve to teach his students critical thinking as well as why he left the world of academia.

[31:40] – His experience as a scientist and reviewer, helped inform his beliefs and fuel his curiosity. He explains why he had no hesitation in adopting the carnivore diet.

[34:45] – There are a few different diet ideologies today: 1. The standard American/Western diet full of wholegrain and low in saturated fat which is the most inflammatory and harmful of all; 2. The vegan diet which is slightly better as it alleviates inflammation but results in other problems down the line due to deficiencies; and 3. The ketogenic diet which works largely because it is not such a mixed diet. Bart believes that a less mixed diet is better and therefore the carnivore diet is the best.

[40:27] – The carnivore diet is still very new and there is not a lot of evidence in the scientific literature. Bart believes that as more time goes by with more people on the diet seeing improvements to their health issues, the anecdotes will build up.

[42:45] – Given his experience in the field, Bart believes the carnivore diet is sustainable for the long-term and contains all the necessary nutrients for human beings. While he emphasizes that he doesn’t give nutritional advice, in terms of what the science suggests, the best meats to rely on as nutritional staple should primarily be from ruminant animals; head to toe. As well as seafood incl. fish and shellfish; plus, or minus cheese, cream and eggs.

[45:37] – One of the most immediate responses to switching to carnivore diet is the reduction in chronic inflammation and resulting mood improvements.

[47:44] – People are often concerned about giving up all the plants from their diet. Bart argues that even if he is wrong, by experimenting with the carnivore diet for two weeks you will not develop any deficiency diseases in such a short time period.

[48:33] – Bart hopes the carnivore diet will be taught in nutritional schools in the future. He believes it is the correct nutritional approach for humans based on his understanding of the science, as well as his experience and observations made in the last 3-4 months.

[49:30] – Any negatives to worry about when eating an all meat diet? Many people have confirmed that after going carnivore, putting anything else back into the body causes a massive reaction. There is also the Vitamin C issue Bart talks about on his Patreon page. (Tip: For more positive experiences and stories he recommends checking out Phil Escott’s Youtube channel.)

[52:20] – For those people who are interested in learning more and following Bart you can find his Patreon channel, where he shares science-based videos, by googling Nutrition Science Watchdog. He is also on Twitter and YouTube where he has some entertaining videos.