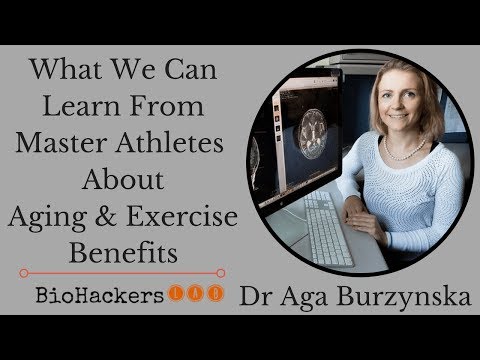 In today’s interview I get to speak with neuroscientist researcher, Dr Agnieszka ‘Aga’ Burzynska, about the research on master athletes and the benefits to their brains from staying active.

Dr Aga is very passionate about using movement to help stay physically and mentally healthy as we age.

She was involved in the research on the brain of famous masters athlete, Olga Kotelko.

Olga Kotelko was a world record holder for multiple master track and field events all the way up to her death at age 95 years old!

Dr Burzynska practices what she learns from researching the effects of movement on the elderly. She is keen climber and is always on the move herself as she is inspired by her study participants.

She shares some great information how our brains change as we age, but also great advise how good physical movement is for training our brains to be smarter.

If you know someone who thinks we need to give up from sport as we get older, make them listen to this episode!

I enjoyed this interview as it just highlights how powerful movement no matter our age not only helps to make us physically fitter but mentally stronger too.

Special thanks to Dr Aga for joining me on the show. 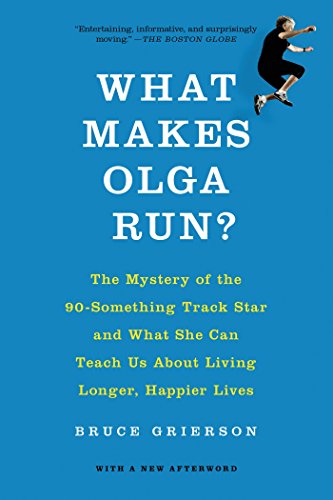 Go to Colorado State.edu faculty page for Dr Burzynska to find out more about Dr Aga or this link to her research lab or follow her on Twitter.

[01:01] – How Aga ended up in the focusing her studies on brain structure and movement and ended up working with Dr. Arthur Kramer who pioneered the research linking exercise to the brain.

[03:26] – Who was Olga Kotelko? She was a Master’s athlete who competed into her 90s and interestingly, she took up competitive sport for the first time only after her retirement, in her 70s.

[05:07] – Aga points out that, because this was a one-time measurement study and there are no measurements taken before Olga started training, we have to be cautious when attributing the benefits to her brain solely to training; it is likely that successful ageing was also a factor.

[06:13] – How does our brain age and how does it differ in individuals that give up sport and those that stay active? Unfortunately, there are no longitudinal studies on this to be able to answer that question.

[07:26] – Aga explains how the brain changes over the lifespan. The peak of brain development is somewhere between early 20’s to 30’s (although there are mixed opinions on this). The brain tends to shrink with age, the ventricles become larger, white matter hyperintensities appear and the quality of fibres deteriorates. Aga also shares an interesting brain highway analogy.

[10:28] – Different ways to estimate brain development; brain volume peaks earlier but myelination can peak as late as the early 30s. Why it might be beneficial to maintain good behaviours, such as getting enough sleep and eating well, into later adulthood when it comes to your brain development.

[11:04] – More information about myelin and why it is important. Myelin acts as an insulator increasing the speed the signals. Aga explains that it’s not only a matter of speed but also timing and synchronisation of different signals in different situations. Multiple sclerosis is an example of a condition resulting in changes of the myelin.

[14:10] – Talking about the effects of movement on our brain and the concept of neural plasticity – using movement to grow new neurons and make better connections. Aga’s focus is on aerobic fitness and how it causes physiological changes in our body and the brain. She explains why we should think of the brain as just another organ in our body and how because the condition of our blood vessels improves with exercise it could have benefits to the brain and cognition.

[17:52] – The challenges of designing these studies, there are many factors that could be contributing and having an effect on people.

[18:48] – What was the most surprising discovering when studying Olga’s brain? She had very high white matter integrity in the prefrontal part of her brain, more than women who were 20 years younger than her. Her brain volume was also better than expected. Aga believes this is in part due to Olga staying very active in her later life.

[21:58] – Why does the brain volume decrease? It seems to be a combination of multiple factors including neuropil shrinking, there are fewer connections, and possibly changes in brain vasculature.

[23:28] – How high impact sports and resulting concussions could result in loss of the benefit of exercise to the brain – our brain is not meant to be shaken.

[24:48] – What is the function of prefrontal cortex in our brain? Evolutionary it is one of the youngest parts of our brain responsible mainly for high-level cognition and thinking. It also has a role in cognitive control and executive functions; structuring behaviour and control impulses to execute a goal.

[26:00] – Aga is skeptical about the advantages of cognitive training on its own as there is limited evidence in terms of transfer to real life benefits. Perhaps strategy training would be better? Instead, she believes exercise results in multiple benefits in both the body and brain; endorphin release, better brain perfusion, better upregulation of protective nootropic factors and pro neural plasticity in the brain are examples of these positive effects.

[28:35] – Aga points out it is still important to be cognitively active, but she suggests some activities are more productive than others. Activities, where we are learning new skills, are more productive than solving crosswords/sudoku puzzles, which might not always be challenging enough. Dance is a good example of an immersive activity which could have a special benefit for our brain as it mixes both cognitive exercise and social stimulation.

[29:32] – Talking about the importance of the social element and the motivational aspects of exercise on the brain.

[31:04] – Are there differences in the types of activity? Weight lifting vs swimming vs running etc… Aga explains how they used scientifically validated accelerometer devices (e.g. devices like Fitbit) and related them to brain health. They found that people who sit less have greater integrity in the white matter, near the hippocampus (structures related to memory formation), as well as a slower decline of white matter over six months.

[33:23] – Aga gives us some tips! First one is to try and avoid long periods (2 hours) of uninterrupted sitting. Try to get up from time to time even if its just to get a glass of water or go to the bathroom. The second is to do some physical activity. While there are studies trying to determine the best intensity level, duration, and frequency of exercise, all exercise we enjoy doing (within healthy limits) is beneficial.

BioHackers Lab Tip: a full body vibration machine is easy to do at home

[36:19] – Doing activities we enjoy means we will persevere and keep doing it. Aga talks about a study using dancing to encourage physical activity by making it more fun. Dance is one example of an activity where there are also aspects of learning and memory.

[40:07] – Discussing the 23 and a half-hour disease. Is half hour or hour of exercise a day enough to mitigate the damage done by prolonged episodes of sitting the rest of the time? It may give us some benefits but it won’t necessarily protect us from other physiological effects of sedentary lifestyle e.g. we know two hours of interrupted sitting affects our metabolisms.

[42:53] – What is a fidget desk? Gary talks about how our body wants to move and explore. Olga was exercising, but she was also active and engaged throughout her day; she would travel, volunteer, make dumplings and was stimulated in many ways.

[44:44] – Aga talks about how we get comfortable and don’t challenge ourselves enough. How engaging through social media doesn’t equate to real life engagement – exercise is a good way to get out there.

[46:47] – In addition to dancing, climbing is another multisensory activity which can be done in a very safe way. Research also shows that getting outdoors and being in contact with nature relaxes people and makes them more creative. We can and should still play as adults!

[48:36] – Aga mentions research which shows similar effects of exercise on the brain are also observed in children. It is not only aging adults, but children who are fitter tend to have a larger hippocampus and better spatial working memory. (ref)

[49:36] – Why we shouldn’t overlook the importance of exercise for kids at school and their performance. Aga explains that we build cognitive/brain reserves throughout our life and there are benefits to having more to lose from when we start aging. It’s never too late to start building it up.

[51:17] – Thinking of movement as nutrition. It is a foundation for optimal human physiology and a key element throughout our lifetime.

[52:17] – Aga thanks her participants and talks about the great source of inspiration she gets from them; how it’s never too late to start and how to push through challenges. She also shares the motivation behind her starting training for a half-marathon!