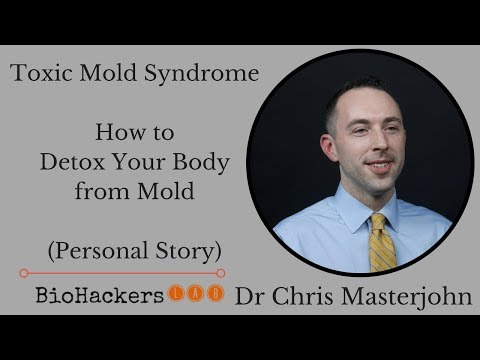 In today’s interview I get to speak with nutritional science PhD, Dr Chris Masterjohn, about his own personal struggle with a toxic mold illness & how he has biohacked his health to help get better.

Chris is very passionate about understanding anything to do with nutrition and health.

However, he recently had an exposure to environmental mold toxins called mycotoxins in an apartment that he lived in. These toxins caused him to develop strange symptoms that he had never suffered with before.

We not only talk about the symptoms you might experience, but also how to try diagnose the problem and then how to treat mycotoxin issues.

If you know someone who thinks they are suffering mold toxicity health problems and they don’t know where to start then this episode is for them!

I enjoyed this interview as I have followed Chris for years ever since I started my butter coffee experiment and went deeper down the biohacking rabbit hole.

After speaking with Chris I have a better understanding of how easy it can be to be exposed to bad mold and how much of a problem that can have on your health. I loved the part on how he started biohacking his symptoms to find the best treatment for him.

Special thanks to Chris for joining me on the show. Enjoy the episode!

[00:20] – Introducing Dr Chris Masterjohn, who gained a PhD in Nutritional Sciences from the University of Connecticut, served as a postdoctoral research associate at the University of Illinois and as Assistant Professor at Brooklyn College before deciding to start his own career as a solopreneur.

[00:59] – Years ago Chris worked on helping to dispel the myth about cholesterol, while he still helps people who want to find out more about cholesterol and has episodes on this topic on his podcast, Mastering Nutrition, he has since switched his focus to new avenues.

[02:46] – While Chris has some involvement with the Weston A. Price Foundation and the paleo movement, he doesn’t necessarily think in terms of preferential ‘diets’; people need to eat food that is the most nourishing for them. We talk about his views on good nutrition and his default guidelines which include: eating whole foods, not eating a lot of junk, eating nose to tail, eating a lot of vegetables and greens, diversifying the starches you eat, and finally eating a broad array of foods and not restricting yourself unless you need to. Specific goals or problems are dealt with very individually.

[07:16] – Recently Chris had a mold toxicity illness issue a.k.a toxic mold syndrome. He explains how his health suffered from being exposed to high levels of mycotoxins & how he started developing a fungal skin infection and respiratory problems from it. He initially thought the high levels of barium were at fault, but after consulting an environmental medicine doctor and getting a mould inspection in his apartment he found he had an infestation and was probably suffering from mould toxicity.

[12:28] – Chris explains how the tests available for mold toxicity are controversial and their efficacy is not widely agreed upon. It can be a challenging issue to diagnose and not everyone will develop the same symptoms. Presence of mold can manifest itself in different ways; infection, toxicity or allergy. We talk about how immunosuppressive effects of mould can even cause secondary symptoms.

[18:02] – It is good to keep in mind that it is not only a single piece of evidence i.e. presence of mold that points to an issue, but rather a combination of additional factors that together paint the full picture. For example in Chris’ case a combination of having significant symptoms, which were relieved when he left the apartment, water damage, mycotoxins and species of mold that are attributable to these problems led to the conclusion of a mold toxicity issue. Chris also explains why he is now dismissive of urinary tests for mycotoxins as the results didn’t prove very useful.

[21:24] – We discuss the need for better biomarkers; Chris explains we would need to define this by designing a new treatment protocol and then test it. There would be huge challenges in performing such a study. The best advice for someone who thinks they might have a mold problem would be to find someone who is an expert on this topic to consult with.

[25:01] – After the mold inspection Chris moved out of the apartment right away and threw out the couch, mattress and anything else with an absorptive surface. He explains how the mold was found inside of the wall of the bathroom and on the other side of this wall was the living room. The mycotoxins might have been seeping out through the other side of the wall and getting on the couch. This explained why he noticed his symptoms were lessened when he slept in his bedroom!

[31:16] – Often the issues with mold growth can be down to a building construction issues. It is interesting to note that while in theory the landlord would have to remediate this issue before the new tenant moves in, in practice they probably wouldn’t as there is no law that requires any kind of third party certification that the remediation was done correctly.

[34:50] – Before realising he had a mold toxicity issue Chris also uncovered he had elevated barium levels in his system. He explains how some of the makeup powders used for filming YouTube videos, and the paint chips he inhaled caused this issue.

[36:40] – Chris tried chelating the barium with EDTA and after measuring the minerals in his hair also started supplementing minerals he was low on. He warns this almost gave him a zinc deficiency even though it was measuring high in his hair.

[38:22] – To try to detox from the mycotoxins Chris took activated charcoal and sulforaphane, but he doesn’t believe this did much to help with the detox. The two things that really did help – apart from eating a potassium rich diet – was adding zinc supplementation and vitamin A to other minerals he was taking, as well as adding bicarbonate supplementation to try optimise his urine ph levels. This made an enormous difference in his vulnerability to the twitching episodes.

[39:53] – Chris explains how he started taking bicarbonate after the results of a plasma amino acid analysis showed that his glutamate was really high, and glutamine was really low, indicating an acid load problem. After noticing that, other than not eating enough potassium, what exacerbated Chris’ twitching problem was eating anything acidic he started measuring his urine ph; it was constantly 5 or under. He explains how his workouts made the acid problem even worse and how taking bicarbonate eventually brought up his urine ph and gave him more energy. Get Urine PH test strips on Amazon here.

[44:09] – Chris shares how he takes his sodium bicarbonate and warns not to take bicarbonate with food because; take it as far away from food as possible. Bicarbonate was a game changer for Chris’ energy levels and twitching symptoms.

[47:29] – The other two things that were hugely helpful to Chris are taking zinc and vitamin A. He explains how after putting on some more muscle mass he noticed he was getting dry skin, which is an early symptom of zinc deficiency. After three days of taking zinc supplementation his test results still showed he was borderline clinically deficient, but he did notice he didn’t need bicarbonate on his workout rest days. Chris shares some of the possibilities as to why this might be.

[49:48] – Around the same time Chris started taking zinc supplementation he also started taking vitamin A. The combination of the two cleared up the lingering dermatological symptoms he was still experiencing. The big game changers: moving out, bicarbonate, zinc and vitamin A.