In today’s interview I get to speak with low carb/keto/paleo diet nutritionist, Amy Berger, about how a low carb high fat diet can help improve brain function and be an Alzheimer’s antidote.

Amy is very passionate about understanding how what we choose to eat can affect brain function.

She wrote a brilliant book called The Alzheimer’s Antidote which helps to explain the link between diet and brain health.

We talk about how Alzheimer’s disease is also called Type 3 diabetes and that is why eating the wrong foods can make the condition and symptoms worse.

If you know someone who is suffering dementia, Alzheimer’s disease or wants to try prevent getting cognitive decline as they age then this episode is for them!

I enjoyed this interview as one of the main reasons I started following the low carb diet & ketogenic diet research was seeing how these types of food can help neurological conditions of the brain, like epilepsy and Alzheimer’s. Amy’s research for her book just further highlights the importance of what we eat influences brain health in the short and long-term.

After speaking with Amy I have a better understanding of how easy it can be to start a low carb diet and not make it complicated to do for long-term brain health benefits. After reading her book, I feel it would be great resource for anyone even looking how to start a low carb or ketogenic diet. I have to compliment Amy on how well she writes. 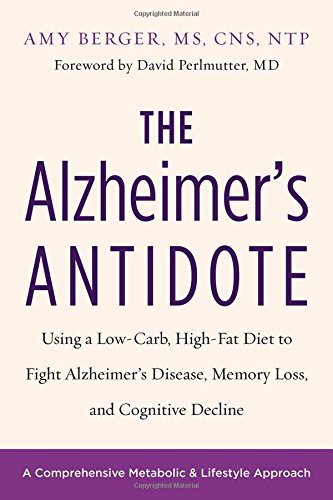 Special thanks to Amy for joining me on the show. Enjoy the episode!

[00:59] – Amy’s book isn’t necessarily just about Alzheimer’s, or staving off Alzheimer’s, anyone who wants to have a healthy brain should read this book.

[01:48] – We talk about understanding the difference between Alzheimer’s and general old age cognitive decline. As people age, and especially when in their 80’s or 90’s, it’s not unusual to experience some degree of forgetfulness and personality change, but in Alzheimer’s disease this happens a lot earlier on. Full blown Alzheimer’s or it’s precursor, mild cognitive impairment, is seen in people who are in their 50’s and 60’s. Alzheimer’s is also more severe; people are unable to care for themselves and live independently, getting lost and forgetting names of people they have known for decades for example. Two defining differences are the age and severity.

[03:53] – There seems to be an increase in incidence of Alzheimer’s disease. One reason contributing to the increase we are seeing is that we are better at diagnosing the disease and catching it earlier. However, cases of Alzheimer’s also seem to be on the rise in the same way that cases of type 2 diabetes or cardiovascular disease have been on the rise in the last few decades indicating a common culprit might be to blame.

[05:02] – Alzheimer’s is most likely diagnosed by a neurologist. Amy explains that technically Alzheimer’s is only supposed to be diagnosed upon autopsy. In living patients, diagnosis should only be in the vein of Alzheimer’s like dementia, suspected Alzheimer’s or similar. (ref)

[06:57] – Alzheimer’s is not just a genetic disease; it is a metabolic problem. In simple terms, it is a fuel shortage in the brain. When neurons in the brain lose their ability to get energy from glucose they atrophy and wither, and are no longer able to communicate with each other resulting in memory loss, confusion and cognitive decline.

[08:55] – When we talk about obesity, type 2 diabetes, cardiovascular disease and infertility we don’t question the role that diet and lifestyle play in contributing to these conditions. Amy explains that we should be thinking of Alzheimer’s in the same way. While there is an element of genetics, diet and lifestyle are a significant contributing factor to developing Alzheimer’s disease.

[10:06] – This is not something that develops overnight, it builds over years and even decades. Decline in the brain energy use is measurable even in people as young as 30’s or 40’s. The brain compensates until eventually signs and symptoms develop years down the line. At this point it is very difficult to turn things around.

[11:54] – Gary mentions an interesting tip he read about in New York Times about an early indicator of cognitive decline. Changing walking stride rate while doing general arithmetic could be a predictor that the brain is not coping well. (ref)

[13:09] – Amy explains why she advocates for a low carb or ketogenic diet. If the neurons are losing their ability to metabolise glucose is there another fuel source that we can use to nourish these cells with and give them energy? It seems that yes, they can still use ketones! Amy gives us a quick run-down on ketones for new listeners who are just jumping in and are unfamiliar with this subject. Studies with human subjects with Alzheimer’s and mild cognitive impairment have shown that elevating ketones – while it doesn’t reverse the condition – does result in improved cognition indicating that these neurons are not dead.

[17:11] – Amy clarifies, that for younger healthy people who want to optimize their cognition and their health she doesn’t believe it’s necessary to follow a strict ketogenic diet to potential ward of this disease or have health cognition. What is necessary is managing your blood glucose and insulin levels over the long-term and living in a low inflammatory state. Everyone varies in how much carbohydrates they can tolerate, paleo diets and low carb diets are often enough for people to be fat adapted (having a fat-based metabolism even without elevated ketones).

[18:28] – Exogenous ketones can help treat the forgetfulness and cognitive problems in the short-term. In the long-term, however, it is not just ketones that help people with Alzheimer’s it is also changing the overall metabolic state of the body. Dietary change is fundamental.

[20:47] – Amy is not sure if the salts or esters were more effective, but Dr Newport used esters in the last study she did, and these were very effective. Dr Brianna Stubs exogenous ketone researcher, will be coming back soon to talk about the liquid ketone esters that is now available for commercial use. We talk about using exogenous ketones as brain supplements for a brain boost and Amy explains how athletes seem to benefit more from the ketone salts rather than the ketone esters; possibly from all the sodium they are replacing.

[23:11] – Gary reiterates how useful Amy’s book for anyone wanting to start a low carb diet. Amy simplifies the whole process and gives great tips about where to start, what to eat, what kitchen appliances to buy, etc… While the book is written for people with Alzheimer’s and cognitive decline, this diet is also incredibly effective for a number of conditions, especially those related to insulin resistance such as obesity, polycystic ovarian syndrome, benign prostate hypertrophy, gout, hypertension and more.

[24:54] – Amy explains how other names for Alzheimer’s disease are type 3 diabetes, diabetes of the brain and brain insulin resistance and how we are missing a lot of these conditions because we never test insulin. This is not something you can test for at home. Amy suggest testing for fasting insulin as well as doing the oral glucose tolerance test. Just make sure you request to have your insulin tested along with the glucose as insulin could be elevated even if glucose and fasting insulin is normal. (ref)

[28:06] – An important tip for people who have been on a low carb diet for a while and feel well: while Amy feels it is not necessary for you to do these tests, if you do decide to do the oral glucose tolerance test, make sure you re-adjust your body to carbs before hand to avoid getting a false positive result!

[29:33] – Common prescription medications that people are being prescribed include statins and acid-reflux medication. The age of people who are put on these medications is getting younger and younger, disregarding long-term consequences. Neurons in our brain need certain nutrients and prescription antacids inhibit the body’s ability to absorb nutrients such as B12, magnesium, iron and zinc. Statin reduce internal synthesis of cholesterol and the brain is made up of fat and cholesterol. Naturally, all this causes problems. Dr. Dale Bredesen talks about statins in his book The End of Alzheimer’s: The First Program to Prevent and Reverse Cognitive Decline.

[35:55] – One thing that might surprise people is that most people suffering acid-reflux don’t have too much acid, they actually have too little! Taking antacids makes the problem worse in the long-term.

[36:18] – Some supplements could help aid brain health. Amy believes this should be individualised and there are key blood tests we can get to asses our levels of these things. Most people with cognitive issues can benefit from high dose B12, zinc and DHA; rich sources of these are red meat, egg yolks, shellfish, liver. Choline can help some people as well as compounds helpful for glucose and insulin regulation like berberine and metformin, and esoteric supplements like PQQ and huperzine.

[40:03] – Increasing omega 3 is great, whether through diet or supplementation with fish oil if needed, but what is also important is reducing intake of omega 6 found predominantly in vegetable oils such as soybean, cottonseed and corn oil. We talk about health fats. While nuts are ok, they can contain a lot of omega 6, sticking to healthy fats from grass fed animals (if possible) such as tallow, lard, bacon fat, egg yolks and also olive oil, avocado, coconut oil and other oils low in omega 6 is best.

[42:15] – Omega 6 gets a bad rap! It is an essential fatty acid and we still need some, but Amy explains that because it is everywhere we generally get enough. It is more important to focus on reducing the starch and sugar.

[44:49] – Amy’s book also contains information on stress management, sleep management, exercise and how it all relates to brain health through the unifying theory is glucose regulation. Diet is the cornerstone but on its own it is not enough; a multifaceted intervention is needed to address Alzheimer’s. Gary suggests using a food pyramid visual to imagine how different aspects work together.

[46:44] – While there are other factors at work, for example hormonal issues that contribute to cognitive problems, the biggest take-away seems to be, that in terms of brain health, managing glucose and insulin is paramount.

[48:00] – Finally, we discuss the conditions in nursing homes and the need to open a dialogue with medical professionals in charge of these facilities about the environments and more importantly the diets of the residents.

[50:38] – To get in contact with Amy about a nutritional consultation (which she does over the phone or skype at a distance) or find out more visit her blog http://www.tuitnutrition.com She is also active on Twitter: @TuitNutrition.