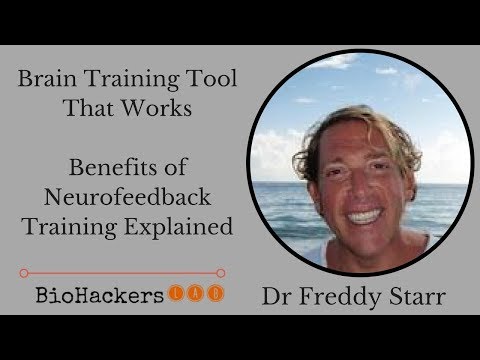 In today’s interview I get to speak with psychiatrist and neurofeedback practitioner, Dr Freddy Starr, about how does neurofeedback work and what are the benefits.

He is a qualified psychiatrist who has been involved in the field of brain training using biofeedback for decades, even before he went to medical school.

We talk about what is neurofeedback, how it helps and who would benefit from getting a brain scan and using the technology?

If you know someone who is interested brain training to help make their lives better then this episode is for them!

I enjoyed this interview as I have a keen interest in how to help maintain healthy brain function as we age and especially how to mitigate the negative effects of stress. I also got to do some interesting reading on the research behind how neurofeedback influences brain function in both the short and long-term.

After speaking with Freddy I have a better understanding of how our different brain waves work and why neurofeedback training done correctly is a good option for helping a brain work better. I have only personally tried a neuroptimal device, but I would love to use Dr Freddy’s option to compare the difference.

Special thanks to Freddy for joining me on the show. Enjoy the episode!

Go to Dr Freddy’s company website here, or add him as a contact on Skype to ask more with username Freddystarrmd.

[00:00] – For people interested in Dr Freddy Starr’s neurofeedback training we have a coupon code of 15% which can be used on either the vacation packages or his home brain training kit. Just use the code biohacker when contacting him via phone or email.

[00:38] – Introducing Dr Freddy Starr, an MD and a trained psychiatrist who has been in the BCI (brain computer interface) field since the early 1990s. In 2003 he opened his first practice utilising brain scanning and neurofeedback.

[01:44] – Freddy introduces us to neurofeedback training which he explains is like exercise for the brain using a computer. We discuss meditation and how by using the neurofeedback method we can see what our brains are doing and can reach meditative, balanced states faster.

[03:22] – Neurofeedback looks at different brain frequencies, which are the speed of different brain waves. Delta waves are the slowest and cause dreamy feeling. Theta waves cause people to feel inattentive and have difficulty getting things done. Alpha is the brain wave of conciseness and people who have problems with this brain wave can have trouble focusing and concentrating or even suffer from depression. Beta are faster and cause feelings of anxiousness, nervousness and irritability.

[06:03] – EEG (electroencephalogram) has been used to study the brain since 1930’s, but since then people have applied various mathematical techniques to the EEG.  Quantitative EEG (a.k.a QEEG) looks at EEG from a statistical standpoint. It tells us which areas are over or under working. Machine learning can also be applied to this technique which can be used to make deductions in terms of prognosis.

[07:53] – Freddy explains how, using numerous data, he developed and patented a machine learning EEG programme called ANNA (advanced neuro network analysis). ANNA is now able to pick up on diseases that can sometimes be missed by doctors.

[09:47] – We talk about different types of brain scanning; what Freddy is referring to when he talks about brain scanning is the QEEG scan, but he takes us through some other types of scans and how they compare including the PET and SPECT scans.

[11:40] – In the biohacking community people often take supplements like natural stacks nootropics, a magnesium supplement to relax or use latest tech and devices to change their brain waves and optimise brain function. The MUSE brain trainer, for example, uses the principles of neuro training. However, Freddy believes that there is too much interference from the environment for this device to be truly effective.

[13:14] – Freddy’s company services physician’s offices around the world and he explains how there are practices in the US now recommending everyone over the age of 40 to have one of these QEEG scans.

[14:35] – Who can benefit from neurofeedback training? It is not only people suffering from different types of mental disorders, but also anyone who is looking to improve their system or manage stress better that could benefit. Freddy adds that it also really lends itself to peak performance training; improving attention and improving reaction time. It is also used for decreasing stage fright and for helping with sleep, mood and memory.

[17:20] – It stands to reason that if we can manipulate the brain and get positive outcomes we can also manipulate it to get negative outcomes. Freddy also gets people sending him scans asking for advice after this has happened in cases when clinicians weren’t properly trained.

[18:06] – The technology behind neurofeedback training was first used to control seizures in humans around rocket fuel. Freddy shares an interesting story about the 1950’s NASA mercury space programme and how it led to research into seizures and work with some very severe epilepsy cases. Neurofeedback is a useful application for epilepsy and seizures and many experts have had great success in using this method. On a previous episode, Emma Williams from Matthew’s Friends talked about the ketogenic diet which is also extremely successful in controlling epileptic symptoms. Freddy agrees, a ketogenic diet, high dose fish oil, magnesium, neurofeedback and cannabis oil, all can help. (Biohackers Lab Tip: Listen to Amy Bergers advise on low carb diet for brain health too)

[21:55] – Freddy talks about his work with Marijuana for Trauma Inc. and their work with veterans studying the brain effects of different strains and concentrations of medical marijuana, which can then be tailored to suit different individuals, lessening the negative responsive and weeding out poor candidates for this type of treatment.

[23:41] – This kind of brain scanning could be a great way to quantify which nootropic supplements work best for different individuals.

[25:53] – Once we learn what certain states are supposed to feel like we can recognise the changes in our brain state. We can learn to put our brain into different electrical positions at will once we learn how.

[28:09] – An interesting question to think about is whether this will alter the personality? Freddy thought about this quite a bit and shares a case he had that led to him thinking about that question. One of the conclusions he has comes to is that there is the constant observer; there is an ‘I’ and that ‘I’ doesn’t change.

[30:04] – The brain should be flexible and move through different states, there are no ‘bad’ brain waves, what is ‘bad’ is when there is an excess of a certain brain wave or it is active when it’s not supposed to be. Freddy shares some examples where this is the case.

[31:52] – Freddy explains that what they are doing with the QEEG is they are comparing the scan to a database of other brains i.e. the statistical ‘normal’. There is an optimal operating tolerance for the brain.

[33:05] – Can stress cause this imbalance? Freddy believes, that in the modern world the constant partial attention where we are constantly multitasking or on the phone is very damaging for the brain. If the brain is closer to the optimal working pattern it is more capable in dealing with stress.

[35:14] – Many people have a head injury from a bump on the head they might not remember. The result of this is that that area of the brain will not be processing efficiently and if it happens to be the area that deals with stress, it won’t be able to handle that stress.

[36:54] – What exactly happens with neuro training? Two methods are used: one is neuromodulation which uses low voltage electricity to stimulate the brain and the second is neurofeedback, which is what Freddy focuses on. Neurofeedback method is purely passive, a cap is put on the head and using brain wave activity a movie, or something similar, is switched on and off conditioning the right areas of the brain.

[41:29] – There was a meditation study at Harvard that showed 8 weeks of meditation, for people who never meditated before, resulted in a hippocampal volume increases, so we know that happens. Freddy also mentions a London taxi driver study as well as the 2005 Monastra study with children with ADHD.

[43:39] – Anyone interested in having a scan should contact Freddy’s team via their website and they will either connect you to a facility that can perform the scan for $100 or they can send you the scanner so you can have it at home, which is a bit more expensive at around $300. Anyone who has been suffering from psychiatric medical or neuropsychiatric problems and had no relief having gone through the traditional route should consider this method. It is non-invasive, low-risk with potential for decrease in symptoms. Generally, people need 20 sessions and applications vary from peak performance to autism.
What do people need to know before doing one of these scans to get the best readings. Don’t drink alcohol or take benzodiazepines, while someone experienced can read around most things, but it’s best to get someone in the normal state of being. The test is pretty robust.

[50:43] – To find out more visit remoteneurofeedbacksolutions.com or internationalneurofeedback.com which is the B2B site. Dr Freddy Starr also runs individual retreats at his home in Costa Rica where you can learn to surf and meditate with him.