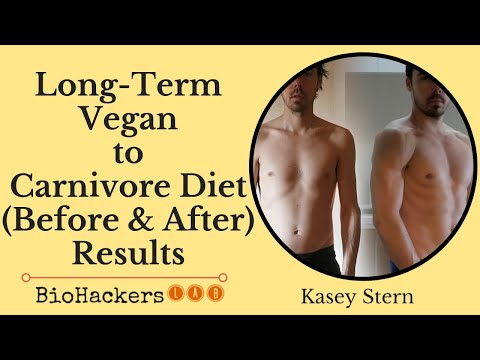 In today’s interview I get to speak with creator of the popular YouTube channel Vegetable Police and former vegan, Kasey Stern.

We talk about how he healed his Ulcerative Colitis through diet and why he made the switch from raw vegan diet to the carnivore diet.

Kasey is very passionate about sharing information he learns about diet and health through his own experiments in an entertaining, humorous way.

We get a chance to talk about how after his Ulcerative Colitis diagnosis Kasey went on a mission to find some relief from his severe digestive symptoms.

After he was advised that diet was irrelevant for helping his condition and being put on UC medication; he decided to take matters into his own hands and started experimenting with different diets.

The raw vegan fruit based diet provided some relief from the worst of his symptoms initially.

However, it wasn’t until he went carnivore that Kasey finally felt real improvements that left him feeling better than ever!

I enjoyed this interview with Kasey as he had a very interesting journey.

The story he shares provides more insights into the importance of listening to our own bodies and finding what works for us.

Kasey was open minded and determined to find a solution, even if it went against his initial beliefs.

He continues to experiment with his diet and fine tune it sharing his experiences with others who may be struggling with similar problems.

Special thanks to Kasey for joining me on the show.

Hear episode 72 directly on your favorite podcast app by clicking a link below:

Follow, or find out more about, Kasey on these official links:

[00:19] – Introducing, Kasey Stern, the man behind the popular YouTube channel, Vegetable Police. Kasey helped heal his Ulcerative Colitis using a raw vegan fruit-based diet, but has since started experimenting with other diets, including the carnivore diet. He enjoys making comedy YouTube videos on how to heal yourself of anything!

[01:15] – When Kasey was first diagnosed with Ulcerative Colitis he was told diet has nothing to do with it and put on medication. He then started his own research and experimentation with various diets. After six years of try and fail, he found a book called Self Healing Colitis & Crohn’s by David Klein. The fruit-based raw vegan diet seemed to work at alleviating some of Kasey’s ongoing problems.

[06:51] – Kasey describes how he started the diet eating bananas and cantaloupe only, eventually adding other vegetables and experimenting with how he felt trying different foods.

[08:01] – With experimentation, Kasey discovered he was allergic to dairy. He believes that this allergic component is a huge factor in Ulcerative Colitis.

[10:18] – Living in Thailand made sourcing certain foods challenging. Kasey also explains the food labels often lack information, so you don’t always know what you are getting.

[11:07] – For the most part, Kasey didn’t have issues with fruit, but he had to limit raw vegetables due to the harsh insoluble fibres. Kasey recommends plain celery juice for people wanting to rebuild their stomach acid.

[14:35] – There are a lot of different rules for the fruitarian diet, most importantly eating ripe, in season, local fruit. Kasey moved to Thailand from Canada where sourcing this is easier. Another recommendation is to eat one fruit until satiation instead of mixing lots of different ones. Kasey explains it is also not a 100% fruit diet; there is a lot of fruit, lots of greens and some nuts and seeds.

[16:30] – It is also important to limit the amount of fat so that the sugar can get into the cells and limit blood-sugar swings. However, Kasey still experienced sugar spikes and found himself getting very tired as his blood sugar rose. He has several videos showing how his blood sugar spiked from fruit meals, with bananas, especially, knocking him out.

[18:48] – Two issues that never improved for Kasey on the fruitarian diet, even though some of his painful digestion symptoms got better, were the fatigue and skin problems. He explains how he could never get all three under control at the same time until he tried the carnivore diet.

[19:36] – After trying all the variations of the vegan-based diet and failing to find a solution, Kasey saw that many people were thriving on meat-based diets. He watched our interview with Mikhaila Peterson and, having experienced similar problems, he decided to try her method for 30 days. Amazingly, he felt positive results pretty quickly and after the initial adjustment period, he found he never felt better.

[22:10] – To break his meat fast, Kasey started slowly by adding some meat to his daily meals. Then he decided to go carnivore and he ate pure beef. It was interesting switching from vegan to carnivore psychologically as he wasn’t used to the smell and feel of meat. On the flip side, he finally felt satisfied and satiated, which he struggled to achieve on a vegan diet.

[25:27] – Kasey explains he chose beef as this is what worked for Mikhaila but it is hard to get good quality affordable beef in Thailand.

[27:07] – Kasey is coping well with digesting animal fats, but he is struggling to get enough with beef, so he is trying the fattier pork cuts now. He believes too much protein can be stressful on the body, so he tries to eat more fat.

[28:34] – While his digestion is still not perfect, currently he is happy that he has no more pain or gas.  He is still experimenting to get where he wants to be but has not seen any improvement with enzymes.

[31:04] – The improved digestion is a major benefit of the diet and it is interesting as it goes against traditional school of thought that we need fibre for good digestion.

[32:22] – Kasey has been a carnivore for four months and is trying to work his way towards a more ketogenic diet eventually. He explains he is using the carnivore diet as an elimination diet and to heal his gut rather than a long-term solution. Currently, he eats meat, bone broth, fatty cuts of meat, salmon, tuna, organ meats and experiments with other foods.

[36:11] – William Shewfelt previously introduced us to the term “hyper-carnivore” and similarly Kasey aims to stick to a predominantly meat-based diet with other elements, introduced into it as he believes it is a more balanced diet.

[37:57] – Kasey explains making the transition from vegan to carnivore publicly was a challenge because of the response he received from other people in the vegan community. While there was some support there was also a significant amount of hate and a lack of understanding of the necessity to prioritise one’s own health.

[39:30] – Animal welfare is an important consideration. There are more ethical ways to rear, raise and slaughter animals.

[43:55] – While people argue that maybe he didn’t do the vegan diet right, Kasey explained he tried multiple versions of the vegan diet and gave it plenty of time before deciding to make a switch to carnivore.

[45:36] – Kasey has had many people struggling on the vegan diet reach out to him, which makes him wonder how many people are truly honest about how they feel. Are there others struggling and not saying anything. He believes it is important to share the truth, so we can figure things out and feel better.

[47:07] – It was a struggle making this switch publicly after building a following promoting a vegan diet.  Does the name Vegetable Police make sense now?

[50:39] – Comedian or health guru, can one be both? Kasey wonders how seriously people take his health advice. He likes to present information that he learns in an interesting, funny, light-hearted way.

[52:24] – To follow Kasey visit his YouTube channel the Vegetable Police. He also has a Patreon page where he does monthly Q and A’s. He is also working on a book called The Carnivore Cleanse where he distills all the information he has learned and shares tips, e.g. the importance of Vitamin C, organ meats, salt and info on protein intake. So, be sure to look out for that!