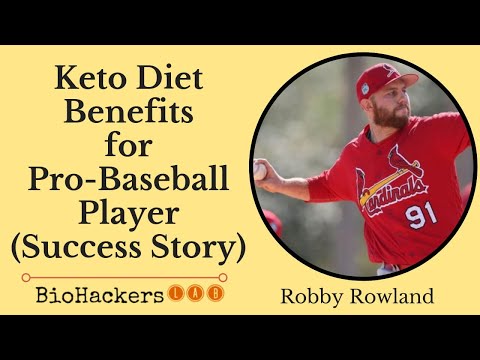 In today’s interview I get to speak with professional baseball pitcher, Robby Rowland.

We talk about how the ketogenic diet helped him optimise his pro-baseball performance, recovery and overall well being.

Robby is very passionate about sharing his experiences, and everything he has learned over ten seasons as a professional pitcher, with others to help them improve their game and achieve their goals.

We get a chance to talk about the realities of life as a professional athlete.

As one might imagine, there are some challenges to maintaining a ketogenic lifestyle whilst living life on the road.

Robby shares how he’s learned to get around these hurdles.

He also shares how he experimented with intermittent fasting, protein ratios and cyclic ketogenic diet to achieve amazing benefits in his energy, cognition and optimised performance.

I enjoyed this interview with Robby as he shares valuable tips to help the aspiring athletes get off on the right foot, as well as the more seasoned ones who are looking at improving recovery and performance.

It was also very interesting to get that insight into the world of professional baseball.

Special thanks to Robby for joining me on the show.

Hear episode 73 directly on your favorite podcast app by clicking a link below:

Follow, or find out more about, Robby on these official links:

[00:19] – Introducing, Robby Rowland, professional baseball player (a pitcher) who has experienced the full spectrum in the game and has a passion to share his experience to help others.

[01:18] – Robby shares his nutritional journey and how things changed for him when he started playing professionally. During the first couple of years, he didn’t give nutrition much thought and he ate what was available; with not a lot of time to prepare meals and a lack of options he would pick up meals on the go. Later he started thinking more how to optimise his performance by looking deeper at weight training, sleep and nutrition.

[07:44] – Is there a big difference between the minors and the majors? Robby explains that there is a long journey between getting drafted to the big leagues, and the competition is fierce.

[10:38] – A small percentage of players makes it to that level and then manage the pressure of staying at that level.

[11:47] – Pitchers need to have high power output numbers. What are the energy demands like for a pitcher? An average pitcher is going to throw five to six innings on average (~100 pitches) before a reliever takes over.

[14:12] – Does the keto diet give better energy? Robby started the keto diet about 18 months ago after an injury. He explains how after the initial adjustment period he felt amazing and was full of energy.

[17:45] – We all feel we can get away with things more when we are younger, but even though he is still only in his twenties Robby felt a different level of energy on the keto diet. He explains how being a professional athlete takes a toll on the body. It is important to pay attention to what you are putting into your body and how you are sleeping etc. Robby: “It all matters; everything you do in your day is a stepping stone to what you are going to become.”

[21:00] – Right around the time Robby was experimenting with fasting, his teammate, Brent Dean, told him about the ketogenic diet he was on; he showed him the ropes in those initial stages.

[22:39] – For Robby’s tips on travelling and eating keto visit his YouTube channel and look for his early videos where he documented what it took to stay keto on road trips. There was a lot of meal prep and packing ahead involved!

[26:08] – When he first started the keto diet, Robby was obsessed with tracking everything and experimenting with ratios. He was at around 300g of protein and fat each; 8,000-10,000 calories a day. He also explains he was lenient on carbohydrates as he was burning through them quickly. He was experimenting with what he had to do to feel his best.

[27:46] – Robby lost a lot of weight and body fat, which wasn’t something he was aiming for. He was focused on the improvements he was seeing in his cognitive abilities.

[29:33] – There are high energy demands for professional athletes and for a pitcher like Robby muscle power is important. He explains the struggle he faced getting this balance right initially, due to the unintended weight loss; He felt good, and was recovering well but his ball velocity was down. What helped was supplementing with exogenous ketones.

BioHackers Lab Tip: for more on health benefits of exogenous ketones and how they work check out our interviews with Dr Brianna Stubbs.

[31:53] – Robby explains he is suspicious of supplements, so after some research on exogenous ketones he uncovered the more you supplement the less the body produces naturally. He still supplements occasionally but does not rely on them as much as he did when he was in the process of fat adaptation.

[33:34] – For other professional ballers seeing a similar drop in output speed, Robby recommends supplements for the initial adaptation phase. It is also valuable to have a mentor – Robby’s advised potassium and magnesium + salt on everything! Another thing that helps is being active. For an extra boost, exogenous ketones help, but make sure you are getting them from good quality, reputable sources.

[36:01] – Robby always recommends the keto diet, even to the young athletes just starting out, due to the anti-inflammatory benefits, cognitive benefits and practice of willpower. The only exception to that is if someone is wanting to make the switch during the season. You have to be smart about the timing of making the switch.

[39:20] – On Robby’s podcast, The Robby Row Show, Anthony Jay said something Robby believes to be very true: trust the science and worry about the other stuff later. You need to give it time for the initial adjustment period before you start to see the benefits; Robby encourages people do more research into the benefits.

[41:07] – Even though he will add MCT oil etc. if needed, through experimentation Robby discovered that he prefers to get the bulk of his nutrients from whole, dense protein. He believes there is no substitute for quality red meat (250 grams) for making him feel optimal.

[44:05] – Did Robby experience any lapses in the diet? Yes! There are occasions and celebrations with the team where this has happened. He also explains he has not had success with bulking up on keto and during those periods has had some more leeway in the diet.

[47:38] – Robby explains that when he is keto he needs a lot less sleep. He also, encourages people to be strict in the early stages (6-8 months) of fat adaptation. Once you are adapted it is easier for your body to get back to ketosis quickly, after occasional cheat days.

[50:05] – How do the night games and late-night meals affect the athlete’s circadian rhythm? Robby tried to adjust his clock to his schedule. He explains he starts his day by going outside and waking on the grass barefoot.

[53:10] – Because he will often have his last meal late at night, he doesn’t eat breakfast and prefers to eat before the games. He explains how he experimented with intermittent fasting and added fat to his morning coffee.

[56:01] – Chewing gum and baseball. Does chewing gum help with focus? Robby has not chewed gum since he went keto and actually doesn’t chew anything while he’s pitching. Being keto he doesn’t need to rely on anything to help him focus, but while he is of pitch he chooses seeds instead. And instead of Gatorade, he’ll drink salted water.