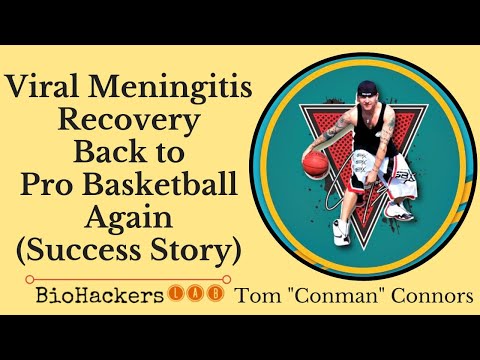 We talk about his comeback story from a debilitating viral meningitis infection largely thanks to traditional Chinese acupuncture.

Tom is very passionate about pushing boundaries and entertaining people with his incredible basketball antics both on stage and on the basketball court.

Tom was on top of his game when suddenly he experienced a great blow to his health.

Viral meningitis left him feeling so exhausted that he could barely function long enough in a day for regular life chores without debilitating fatigue episode striking at random.

Tom explains how his frustration with the slow recovery process and the impact on his career, led him to seek alternative solutions.

He decided to open up his mind and give traditional Chinese acupuncture a go.

I enjoyed this interview with Tom, as he shared his inspiring journey to recovery.

Hopefully his story will inspire others who are struggling with similar experiences not to give up on finding something that works.

Tom also shares some advice to young aspiring athletes out there!

Special thanks to Tom for joining me on the show.

Hear episode 78 directly on your favorite podcast app by clicking a link below:

Follow, or find out more about, Tom on these official links:

[00:19] – Introducing, Tom the “Conman” Connors, regarded as one of the best professional street basketball players in the world. As an urban sports star he has had on opportunity to entertain millions of people from centre stage performances to TV shows worldwide. He also currently holds, 16 basketball world records and is a UK and European street basketball champion.

[01:49] – Tom shared how he suddenly collapsed during a live on-stage performance. After having loads of tests in hospital where apart from some low vitamins levels they couldn’t find anything wrong, finally, a private specialist diagnosed him with viral meningitis.

[07:26] – Unlike with bacterial meningitis, there is no rash with viral meningitis. Tom explains how he felt fine right up until the point the sudden feeling of extreme exhaustion hit him on stage.

[08:35] – Because it was a viral infection, there was no pharmaceutical treatment the doctors could give him. He was told to rest, eat well and make sure he is having enough vitamins. He explains how the extreme fatigue would hit in an unpredictable manner throughout the day, and the very slow recovery process he went through.

[12:33] – After a full year of slow recovery and a negative hit to his career he decided he needed to try something different. This led him to trying traditional Chinese medicine (TCM) acupuncture.

[14:27] – Tom’s explains how his first session of acupuncture was awful afterwards with sever fatigue feelings. His acupuncturist explained it was going to be a long journey to figure out where the problem is.

[16:25] – For his second session, instead of trying to “strengthen”, his acupuncturist focused on “removing” things from his system in a process called removing damp. This led to an immediate improvement for Tom.

[17:57] – Tom explains what the process of acupuncture is like, as well as, what the sensation of having needles inserted is like.

[19:41] – After his acupuncture sessions, Tom would go for walks to test how well he was doing and see any improvement. When he was ready, they went back to strengthening and so far, (it has been a year since he started acupuncture) he has been doing well and for the most part has recovered.

[22:15] – The period of recovery is going to be different for everybody. Tom explains how frustrating this process can be.

[24:22] – Meningitis affects the brain and Tom found that the bright lights still affect his energy levels. He did find that sunglasses seemed to improve the impact of the light and his energy levels and thinks the blue light blocking lenses might be helpful, too.

[28:44] – In addition to the acupuncturist, he also regularly sees an osteopath and chiropractor, along with monitoring his nutrition which are all hugely helpful to him. But none of those things resolved the fatigue issue the way the acupuncture treatment session did.

[30:43] – The meningitis didn’t affect his ability to do the trick shots or his skill level, it was more the energy levels that depleted so much quicker, affecting performance. He is more aware of how he is managing his energy levels.

[34:59] – The street basketball community was not aware this has been happening. Tom explains he didn’t want the news to be out there impacting his career and sponsorships, only now that he is recovered, he is sharing his story.

[36:54] – For others going through a similar situation, Tom recommends opening your mind to alternative solutions, especially when the western medicine can’t help. Traditional Chinese medicine helped Tom (and his wife with her migraines and endometriosis) when everything else failed.

[40:44] – Tom tried some herbs and spices he researched, but found that in comparison to the traditional Chinese acupuncture they didn’t have as much impact. He takes vitamin C and that helped him, but he recommends people experiment themselves, and find what works for them.

[41:59] – In January, Tom is going to be trying for four more basketball world records, so look out for that!

[42:22] – Finally, Tom shares tips for any aspiring basketball players. Including the dedication, mindset and sacrifices that will take you there.

[44:26] – For those people who are interested in learning more and following Tom, find him on his YouTube channel where all his main big videos are or look for him on Instagram or Facebook.
Search Conman Basketball.