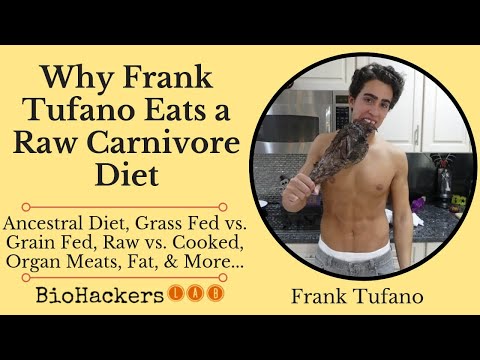 In today’s interview, I get to speak with raw carnivore dieter, Frank Tufano.

We talk about the importance of consuming nutrient dense animal foods and what he considers to be the healthiest diet.

Frank explains how he set out to answer one simple question for himself: “What is the best diet?”.

His research attempting to answer that question, led him to believe that today’s diet – full of refined, sugar laden foods – has moved too far away from what our ancestors used to eat and led to a host of problems.

He strives to heal the body and achieve long-term health with his take on the carnivore diet, that is as close to our original way of eating as possible.

I really enjoyed this interview with Frank exploring some of his interesting opinions on an all meat diet and how to optimise your health using animal based products, with not needing vegetables or fruit.

Special thanks to Frank for joining me on the show.

Hear episode 82 directly on your favorite podcast app by clicking a link below:

Follow, or find out more about, Frank on these official links:

[00:19] – Introducing, Frank Tufano, who has been following a raw carnivore diet on YouTube and advocating for the importance of high-vitamin animal foods. For the last six years, he has been following what he considers the healthiest diet, with the least amount of inflammation, and only consuming what our ancestors would.

[01:20] – Frank explains how his journey to find the ‘healthiest’ diet led him to uncover Paul Check, Western Price and Nora Gedgaudas’s: Primal Body, Primal Mind. He explains that he wanted to combine the notions of the importance of animal food nutrient density and ketogenic metabolism, but was aware of the glaring issues with carnivore diet; such as a lack of focus on nutrient density and macronutrient ratios of fat to protein.

[04:48] – Technically speaking, Frank follows the carnivore diet, but his beliefs aren’t necessarily carnivore to others point of view.  His focus is on the nutrient density and removal of inflammatory foods. He believes even carnivores could be eating an inflammatory diet by consuming meat products high in omega-6 from commercial chicken, pork, processed meat etc… He also explains why he has no problem with ancient plant foods, but it’s the modern plant foods that can be problematic.

[09:27] – People in blue zones consume about 30% animal foods, 70% plant, but diet can largely depend on what we have access to as well as region and climate.

[10:45] – Our ancestors ate high-quality meat that is quite different from the commercially grain-raised meat we get today. If this is all you could afford, however, it would still lower inflammation in your body (provided it is not high in omega-6). Frank explains some concerns are the lower nutrient content and antibiotics, toxins etc., – the difference in quality becomes most apparent in the palatability of fat and liver of the animal.

[14:32] – Frank buys grass-fed meat from the local supermarkets/farms. He explains we should prioritise high quality fat and organ meat as that’s where most of the nutrients are contained. The pasture quality also plays a part.

BioHackers Lab Tip: Listen to Dr Zsofia Clemens explain why lots of animal fat and organ meats are good for us

[16:20] – There are three nutrients you are missing out on if you are only consuming meat: vitamin A in the form of retinol that’s mostly found in the liver, vitamin K2 and omega-3 fatty acids that are both found in high quality fats. In terms of alternatives, cod liver oil is a good supplement to consider.

[18:58] – Frank explains that he is pro dairy and eggs, but personally he is allergic to both in large amounts. He recommends getting the highest quality you can and figure out if you tolerate these foods. He also talks about considering food items in terms of the ancient diet perspective.

[27:37] – Frank explains the benefits of raw vs cooked foods and shares his own preferences. There are some considerations to keep in mind with regards to differences in nutrient retention (primary concern being the loss of vitamin C) and digestion differences. However, it’s interesting to note that every single group of indigenous people consumed a combination of both.

[33:12] – How do we ensure we are getting ‘nutritional completeness’? Frank explains the idea is to eat nose-to-tail as each part of the animal has different nutritional properties.

[40:20] – We don’t often hear about an all-seafood carnivore diet, but Frank explains there were indigenous tribes that thrived on this type of diet. It is still important to eat a whole animal and include shellfish, but it’s difficult to consume enough calories and fat on seafood/fish only version of the diet.

[46:03] – Frank’s cholesterol has been roughly the same since he was sixteen; the change in his diet didn’t affect this or his other blood.

[47:57] – After Dr Shawn Baker MD shared his blood results showing higher than expected glucose, some people said a carnivore diet will cause type 2 diabetes. Frank believes Shawn’s results could be due to not fasting long enough and his workout regime. Frank’s own glucose has always been quite low and explains there can be a lot of variance with blood results from day to day.

[50:33] – Frank talks about vitamin D3 and its importance to health. It is therefore concerning to note that almost everyone is deficient in vitamin D3; in fact, ancient Arctic people’s levels after the winter were notably higher than most people have in America today.

[53:14] – Frank believes medical guidelines are often incorrect so its hard to gauge what our blood work is telling us from one particular measurement.

[55:01] – For those people who are interested in learning more and following Frank find him on his YouTube channel where he shares a lot more information on the four elements he goes by: diet, sun, exercise and water. He is also on Instagram and Twitter and is also working on a book and video course.