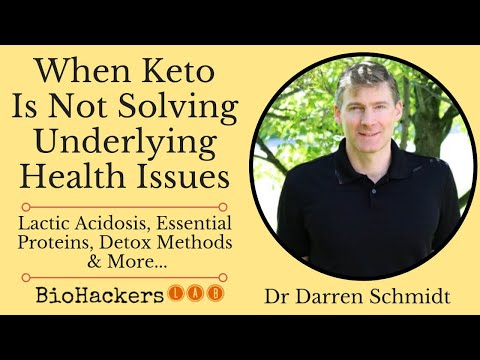 In today’s interview, I get to speak with doctor of chiropractic and clinical nutrition expert, Dr Darren Schmidt.

We talk about the ketogenic diet and how lactic acidosis impacts on health and ketosis success or failure.

Darren is very passionate about getting to the root cause of health problems and addressing these through the power of nutrition.

Today, we get a chance to talk more about the importance of understanding the underlying mechanisms of chronic disease even when adopting a keto way of eating to try solve these health issues.

Darren explains how a holistic view that looks at the big picture is essential for effectively treating chronic health problems.

I really enjoyed this interview with Darren as he brought to attention a rarely talked about topic on lactic acidosis causing chronic health problems.

For anyone who has experienced problems when attempting ketosis (as well as numerous other health problems), lactic acidosis might be something to look into.

Special thanks to Darren for joining me on the show.

Hear episode 83 directly on your favorite podcast app by clicking a link below:

Follow, or find out more about, Darren on these official links:

[00:19] – Introducing, Dr. Darren Schmidt, a chiropractor who has been focusing on clinical nutrition since 1998. He believes in following the physiology and is an advocate of low carb and keto way of eating for helping health. Darren uses nutrition to get to the root cause of health problems.

[01:29] – Around 2000, through his own self-experimentation, seminars, guidance of people in natural health care world and other care practitioners Darren decided to make a switch to low carb/ketogenic way of eating.

[03:31] – Darren believes that when it comes to the ketogenic/carnivore or ‘ketovore’ diets, the problem with the traditional ketogenic focus is that it often contains artificial keto deserts, fat bombs and restricted amount of protein. A carnivorous focus is more natural with higher amount of protein. Darren mentions he learnt from Dr Ted Naiman who talks about how protein does not prevent ketosis and how there is no need for a lot of fat in the diet to get into ketosis – the only rule that matters in having carbs below 20g/day.

[06:12] – In terms of ketogenic diet and weight control, Darren explains that the important thing is to ensure is, firstly, that we are getting enough of protein, vitamins and minerals; the three building-blocks of the body. Secondly, that we keep the two fuels, carbs and fats, down.

[08:41] – Darren explains how his colleague, Kristen Clore, who has epilepsy and an interest in ketosis and fasting has determined that animal protein is different to plant protein.

BioHackers Lab tip: Listen to Dr Carrie Diulus who is vegan and thrives on that end of the ketogenic spectrum.

[10:13] – Can the microbiome and genetic factors affect things? There are predisposing factors that can derail success with ketosis. Darren explains how black mold that settled in his heart and lungs impacted on his ketosis and that fungus as well as mold can grow on ketones, not just carbs.

[12:28] – A diet too high in carbohydrate is still the predominant issue for most people. If you have a fungal issue then Darren recommends reducing your carbohydrate intake down to about 75-100g/day (but not so low as to enter ketosis) and avoiding food that can feed the fungus, such as fermented vegetables, processed meats, sweets etc. An anti-fungal diet should be followed in addition to addressing the source of the mould.

[14:20] – There are a variety of symptoms accompanying this type of underlying infection, but some big clues include infections that keep coming back e.g. recurring yeast infections. Interestingly, Darren mentions how 96% of sinus infection are due to a fungal cause. Darren advises that if you are feeling worse on ketosis there is something else going on, however, eliminating carbs by itself won’t kill the fungus.

[16:35] – Darren shares his own experience with mold exposure that caused severe chest pain when he tried to go into ketosis. How did he go about detoxing from this?

BioHackers Lab Tip: Listen to Dr Chris Masterjohn share his personal toxic mold exposure story and how he fixed it.

[19:07] – During his initial struggles with ketosis Darren did a lot of reading about lactic acidosis and the way he sees it vs current medical definition. He explains that the old definition had a lot more clinical relevance for everybody and helped address factors that stop lactic acidosis. The culprit is dirty blood; blood toxicity can be caused by mould, parasites, metals or chemicals and needs to be detoxed before ketosis will be effective.

[20:58] – Darren believes that people who try ketosis and fail suffer from lactic acidosis. There is a bigger picture and we need to put everything together to get results. Darren shares the mechanism of lactic acidosis.

[27:31] – Darren defines lactic acidosis, explains how we can measure it, and shares what symptoms we should look out for, from three broad categories; brain, stomach and heart.

[34:26] – There are people who shouldn’t be going into ketosis until they have dealt with other underlying issues. Darren has an FTP survey on his website for patients to fill out; their symptoms can help uncover lactic acidosis and its various causes. His team can help assist people long-distance.

[37:42] – Does that mean there are occasions where people should increase their carb intake e.g. such as when dealing with a fungus/mould infestation? Darren explains why carnivore version of the diet, with high protein, is better than the older high fat, moderate protein version.

[43:07] – Darren emphasises that it’s the older definition of lactic acidosis that is applicable not the new version that pops up when we google it.

[45:12] – For those people who are interested in learning more and following Dr Darren Schmidt, find him on YouTube. If you want to take the next step and reach out for personalised care visit his website thenutritionalhealingcenter.com