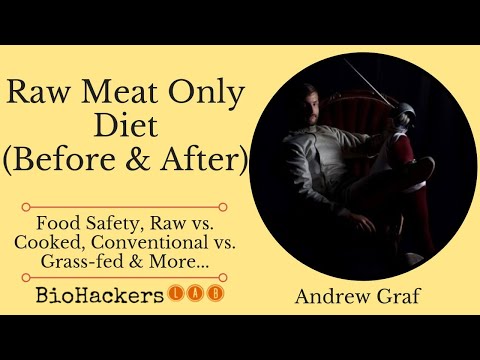 In today’s interview, I get to speak with entomologist and a raw-meat carnivore advocate, Andrew Graf.

We talk about why he chose to follow the 100% raw-meat diet, plus, the results and improvements he saw in his health.

Andrew is very passionate about sharing his experiences and educating people around the fears they have about eating raw-meat.

Since high school, Andrew has been on a mission to lose weight and resolve nagging health problems. Then, after years of extreme exercise and struggling to find a diet that works he found carnivorism. It worked!

However, Andrew decided to take that extra step; he went raw and never felt better.

Today, we get a chance to talk more about the benefits he believes raw-meat offers over cooked.

I really enjoyed hearing more about Andrew’s interesting food journey as well as some of his more controversial thoughts.

Special thanks to Andrew for joining me on the show.

Hear episode 84 directly on your favorite podcast app by clicking a link below:

Follow, or find out more about, Andrew on these official links:

[00:19] – Introducing, Andrew Graf, an entomologist who has been on a raw-meat only diet for the last six months.

[01:36] – Andrew shares his journey that led him to the raw-meat diet and significant weight loss (he was 300 pounds in high school). From calorie restriction and exercise, to a month on the raw vegan diet, to the keto diet, he tried everything to try lose the weight and improve his health.

[07:44] – Andrew noticed he was cooking his meat less and less. He wondered why he felt better the less he cooked his meat and realised it was down to the increased resource yield he was getting from the meat; this meant there is less demand on the body and you end up eating less.

[12:03] – You are low carb on keto and believe you are fat adapted, but carnivore is a whole other ball game. Andrew believes it is because on keto you are restricting rather than eliminating completely.

[12:57] – While he already felt great on a carnivore diet by taking the diet raw Andrew observed he simply felt even better.

[13:56] – To start his raw diet Andrew was lucky enough to be able to have access to affordably priced chuck roast. He also ate ground beef.

[16:04] – Andrew addresses the concerns over safety of eating raw meat. He believes our immunity benefits as it all starts with the gut and explains why keeping the pH level of our stomach low enough is so important.

[18:18] – On the other hand there are sometimes food handling issues to consider and we should also be aware of the antibiotics in conventionally raised meat. Andrew ensures he eats only grass fed and finished beef; he also generally feels better eating this way and believes it’s better nutritionally.

[19:09] – A USDA food inspection microbiologist talked about the safety of raw meat (both grass fed and conventional) and confirmed he eats it himself.

[22:02] – Because it is not always possible to have access to fresh meat, Andrew explains he sources all his red meat from the Simmons family 2S ranch which comes long-term frozen.

[23:52] – Andrew also prefers the fatty cuts. He has no issues with eating fat raw and believes that people actually have problems with the fat when they cook it as they are rendering and denaturing it.

[25:50] – Is cutlery necessary? Andrew explains how it really is a matter of preference and can be a bit less messy. But the raw meat can sometimes be more tender, depending on the cut.

[30:00] – Other than the weight loss, he experienced health improvements such as better energy and improvement in joint paint. He’s eating less and is not seasoning – he is not adding salt to his food. He believes that adding too much salt can be a problem and create an imbalance.

[32:31] – Andrew has a pretty hectic work out schedule. He explains that even though he does not add salt he experiences no hindrances in his athletic ability and endurance.

[33:17] – Andrew believes anyone can benefit from the raw-meat diet but particularity people with issues with digestion and a lack of enzymes.

[35:12] – In terms of organ meat Andrew mostly sticks to liver. He tried heart, thymus glands and kidneys but has not had access to brain as yet. He also explains why, in his opinion, we should not eat organs from conventionally raised animals.

[38:53] – Since switching to raw, Andrew eats less food and his satiety levels increased. He went from 4-5 pounds a day when he was slightly searing his meat to 1-2 pounds on raw.

[40:37] – Carnivore diet is a great elimination diet and can give you feedback from your body.

[42:18] – How does his diet affect him socially. Andrew explains he doesn’t eat out any more but would still join people for the sake of spending time with them.

[43:46] – Andrew explains how after eating wild salmon he could no longer consume farmed salmon.

[44:50] – Insect protein, while it is a good source of animal protein that has been consumed for years, Andrew personally doesn’t enjoy it himself.

[46:19] – Andrew explains how being on the raw-meat diet has made him more aware and compassionate about how the animal that is being sacrificed is treated. Another big topic is the protective mechanisms of plants.

[48:36] – Agriculture is the largest part of entomology when it comes to profit so a lot of research centres around this aspect. Andrew discusses insecticides and pesticides and how they operate. He also explains how caffeine works.

[53:51] – To keep in touch and follow what Andrew is up to, he recommends finding him on Twitter by searching carnivore antman or carnivorous entomologist, he is also on Facebook.