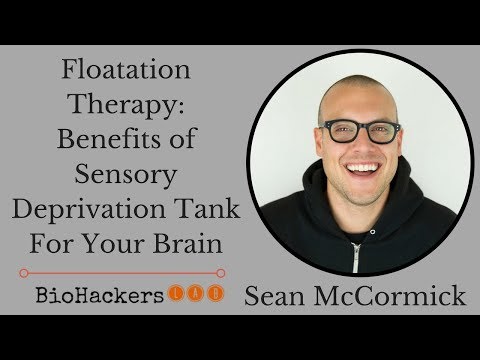 In today’s interview I get to speak with floatation therapy expert, Sean McCormick, about how floating in a sensory deprivation tank helps to improve our minds.

Sean is very passionate about biohacking brain health and the benefits of floatation therapy on our health.

He owns two float centres on the West coast of the USA, Float Seattle and Float Bellevue.

In the interview you’ll hear the back story how Sean ended up getting into the world of sensory deprivation and opening up his own float centers. He explains how after doing hundreds of floats himself what he has discovered about what doing short to long floats does to the human mind for stress relief, creativity and productivity.

Sean shares some great information about how often to float, what time of day to float depending on what you want to achieve and even advanced tips to help make you get the best experience out of your float sessions.

We not only talk about sensory deprivation tanks, but also touch on nootropics for brain health and life coaching.

If you know someone who is interested in trying floatation therapy for the first time and doesn’t know what to expect or how it works then this episode is for them!

I enjoyed this interview as I have not had a chance to do a float myself yet, but have heard so many good things about it from people who have. After speaking with Sean I’m way more clued up on what happens the first time you go to a float treatment.

Special thanks to Sean for joining me on the show. Enjoy the episode!

[00:20] – Introducing Sean, owner of two floatation tank centres in Seattle and a life-coach with a keen interest in how to optimise our lives.

[00:37] – The guys, like Natural Stacks CEO Roy Krebs, love Sean’s floatation tanks. Sean talks about being an ambassador for Natural Stacks and how biohacking means modifying our internal and external environments for optimal performance.

[02:09] – We learn more about flotation tanks and float pods. The water inside the tanks is 10 inches deep with a thousand pounds of Epsom salt diluted into it. The ingredients in the water are pretty standardised for all flotation centres and Sean says that at his centre they also occasionally add Himalayan crystal salts for the added electrolytes; there are 92 minerals and electrolytes in Himalayan crystal salt.

[06:57] – Sean describes the different pod designs used commercially, there are different manufacturers producing different float tanks and float pods. Float pods are the more rounded, egg-shaped pods – i-sopod, a manufacturer in London, spearheaded this design and there is also The Float Pod in Arizona that produce these. Then there are float tanks. At Float Seattle, they have the Ocean float room which is 8.5 feet tall so you can step into it, the Oasis flat tank which is more typical and more ‘sci-fi’ looking, and the Samadhi tanks. At Bellevue, they have the Evolution float pods.

[08:57] – Talking about how the floating experience differs with different designs. In each instance, you are completely closed off – by closing the door but not locking it – to experience the complete darkness and complete sensory deprivation. Sean explains how the industry is building larger and larger rooms/cabins but these tend to have more sound transfer so there might be more echo than you get in a smaller, more enclosed pod.

[10:47] – Because there is a multitude of benefits to flotation, for the sake of simplicity they have been split into three categories. Pain relief from the Epson salts which activate the parasympathetic system. This includes rest and digest, lowered heart rate, increased blood flow and other involuntary physiological operations of the body. At around 25-minute mark there is a decrease in cortisol, epinephrine, norepinephrine etc. and an increased in dopamine and endorphins. Stress relief experienced from the time spent away from the world and switching off. Floatation also aids meditation by cancelling out all external stimuli and helps with sleep. (Biohackers Lab Tip: Monitor your nervous system in a float using a heart rate variability sensor)

[15:21] – Discussing the modern life and the continuous stimulation and connectivity we experience. There seems to be a difficulty and awkwardness associated to just switching off screens and being present. It is almost a luxury to be able to disconnect. Sean mentions how some manufacturers have setup screens on the inside of the float tanks for watching images to trip out on or learning videos to improve golf swing or learn a language, but most people, would benefit from less stimulation.

[20:55] – Another interesting experience is the fact that the tanks are used naked, so there is no need to bring swimming suits.

[21:30] – Sean talks about the history behind floatation. Dr John Lilly conducted research in the late 1950’s on what happens in sensory deprivation; his research also included dolphin communication and psychedelic drugs. His various experiments led to some interesting research and a collaboration with Glenn and Lee Perry who developed the Samadhi commercial float tanks. Samadhi is a term describing the interconnectedness between the observer and observed. Sean explains how floatation tanks were associated with psychedelic use and how the popularity of the float tanks ebbed and flowed over the years finally gaining in popularity once again as an answer to our supper connected, stressed lives.

[25:44] – We can brain supplements such as nootropics to enhance and alter our floating experience. At Sean’s centre, they sell several nootropics for use before and after a float, including ones from Natural Stacks. He believes that if you are interested in consciousness and performing at a higher level you are going to be drawn to things like floating, yoga, meditation, crowd therapy, breath work etc… Sean floated almost 600 times in the last 6 years and each experience was different. Nootropics such as CILTEP, Dopamine Brain Food or Wise Ape Adaptogenic nootropic tea are all great for active floats useful for problem-solving, thinking creatively, critical thinking floats. The other type of floating experience is more relaxing and meditative, focused on breath only.

[28:52] – There is no training required for newbies, all you need is a quick walk-through. Sean believes it’s important not to pre-programme people before their float because that would shape and frame their experience. It’s best to explore things and discover yourself on your own. Our experiences point us to things we need to figure out. If you are uncomfortable, ask yourself why?

[31:52] – For different physiologies, shapes and sizes as well as people who are recovering from injuries, certain positions might be uncomfortable and there are foam pillows and pool noodles that offer some support. Sean recommends minimising the use of these, however, to help you get back to neutral. Floating with arms up and urging the chin back will open you up and help with posture.

[34:42] – Do people fidget and want to turn over the way they would in bed? This is a natural urge, but it is almost impossible to flip over inside the tank. Sean’s longest float was for nine and a half hours! He definitely had the urge to roll over during that experience. He tells us about a professional American football player who wanted to float face down and did this using a snorkel.

[38:04] – Another great aspect of being in the pitch-black darkness is that it stimulates the immune system. Sean talks about the distinction between floating with your eyes open vs closed. We experience hypnagogic images when floating in the pitch-black with open eyes, these are a precursor to visuals. People experience seeing images or hearing music they’ve never heard before which leads to a deep exploration of our subconscious. Watch abc news altered states or sensory deprivation for an interesting story about Neal Karlinsky’s experience.

[43:47] – Can people who struggle to sleep use floating to help reset the body clock? Floating helps with sleep for a number of reasons; the Epsom salt helps relax the body, Magnesium absorbed through skin helps release tension in muscles. Anecdotal reports confirm that floating at night helps with sleep and jet lag.

(Biohackers Lab Tip: Listen to Timo Ahopelto about how to use the Human Charger for jet lag)

[45:29] – People are encouraged to tinker at different times of day with different types of floating experiences e.g. active floats at the start of the day after your morning coffee to help set you up for the day vs relaxed floats at night to wind down with. Sean shares his ideal float time Sunday 8.30am after a really hard workout and an 18 hour fast. Gary ponders how taking Ketones esters – such as the one Dr Brianna Stubbs is working on – would help stimulate the brain and enhance the experience in a different way.

[47:43] – Sean advises us on a typical floatation schedule. For high achievers, twice a week is good to keep operating at a high level but for most people once a week or twice a month is enough. He also gives us examples of how a venture capital fund president director and a Russel Wilson, the Seahawks quarterback, used floating to optimise their performance in different ways. A Swedish study showed that a cycle of a float-day off-float-day off-float-three days off, repeated 3 times is effective and clinically proven to decrease workplace burnout, reduce cortisol and increase well-being. This is a beneficial cycle for those recovering from injuries.

[50:46] – In terms of effective duration, an hour – which is offered as a standard for a float at Sean’s centre – is plenty but they also offer two and a half hours for people who have been floating for a while and want to go deeper. Some centres offer 90 min as a standard float.

[52:14] – Cannabis is legal recreationally where Sean lives and he is a strong proponent of combining floating and cannabis – in particular, consuming edibles – for the deepest experience we can get. We all aim for a better understanding of ourselves and this combination puts us in a state of self-reflection, depth of thought, reflection of the self and life analysis. It’s almost ceremonial/shamanic which he believes is something we all could benefit from.

[55:35] – Sean is also a life-coach and he has a full-day workshop coming up on October 28th called Life-MBA (Mind Body Awareness) at the W Hotel in Seattle. This is a culmination of everything he has learned over the past 6-8 years including coaching techniques, lifestyle hacks, biohacks, relationship frameworks, deep introspection, goal setting, changing negative thought patterns, fasting, ketosis, yoga, floating, increasing intuition as well as some esoteric modalities and metaphysical frameworks.

[57:38] – Other biohacks Sean is a fan of include cold water therapy, certain supplements and people tinkering around. While he is not big on techs such as Fitbits and heart rate monitors etc… he does have a huge interest in Himalayan salt Sole in the morning, dry brushing, cold plunges, tongue scraping and Wim Hof breathwork. He believes that none of us are performing to our optimal potential and that we need to look outside of ourselves for resources and coaching.

[51:48] – To contact Sean about floatation at one of his two floatation centres: floatseattle.com in the Green Lake neighbourhood or floatbellevue.com Also find them on Twitter, Instagram or Facebook. To find out more about Sean’s workshops and buy tickets visit: www.Life-MBA.com