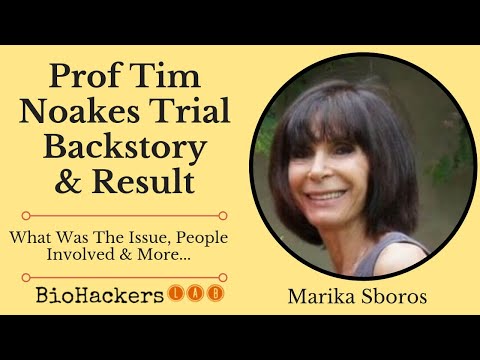 In today’s interview I get to speak with South African investigative journalist, Marika Sboros, about the Prof Tim Noakes trial from the backstory why it happened, who the key players were and the final outcome.

Listen to The Podcast Episode

[01:29] – Introducing Dr Marika Sboros, a journalist with a hard news background. She has experience in mainstream media news focusing on politics and crime stories and has followed that up focusing on her passion in lifestyle journalism. This includes editing and research, particularly research around low-carb high-fat diets.

[02:38] – Professor Tim Noakes, one of South Africa’s most eminent scientist, went through a three-year process, starting back in the year 2014. How did it all begin, and did it really all start with a single tweet? Marika takes us through the history behind how this case against Prof. Noakes even started.

[03:38] – What exactly was the charge against him? This charge was just pretence to get Prof. Noakes, an A1 rated scientist, in front of the Health Professional Council of S. Africa (HPCSA) and talk about his views that went against commonly held orthodoxy on diet.

[06:13] – Prof. Noakes received a lot of negative press from other South African doctors before the case started after challenging the notion that saturated fat causes heart disease; one of the names mentioned distanced themselves from the press release.

[09:49] – Some bizarre elements to the HPCSA case against Prof. Noakes and who was behind the complaint laid.

[13:08] – One of the accusations against Prof Noakes was his lack of expertise in nutrition. Marika explains why this is incorrect and how the HPCSA was not able to prove this as Prof Noakes has a relevant background as an A1 rated scientist in sport science and nutrition.

[14:40] – The correct verdict terminology explained. They did not prove that the advice he gave was unconventional because it was not evidence-based or that there was any harm (or even the potential for harm).

[16:02] – How Prof. Noakes’ low carb high fat Real Meal Revolution book success might have upset some Association for Dietetics in South Africa (ADSA) dieticians and might have contributed to the instigation of the case.

[16:50] – Prof. Noakes presented many studies and considerable evidence to the trial. The HPCSA case was mainly based on one study, the Naude Review, which Noakes’ defence arguments showed is a flawed study.

[20:54] – Summary of the structure of the HPCSA professional conduct committee; made up of five committee members.

[23:21] – What happened when Prof. Noakes’ advocate, Michael van der Nest, asked the HPCSA’s expert witness about the doctor-patient relationship issue; why weren’t the other two dietitians charged? Also, was there one and should one person be made a scapegoat?

[26:53] – How advocate Joan Adams (one of the committee members) explained that the committee couldn’t advise on changing the world’s nutritional guidelines using the presented LCHF diet research.

[28:25] – Marika talks about the most interesting question that was left unanswered. If Prof. Noakes is not giving unconventional, dangerous advice, who is? HPCSA did not give any robust evidence for their side, leaving them red-faced.

[30:02] – The strange event of the HPCSA releasing a false guilty press release before the case had even ended (Gary clarifies this more at the beginning of episode).

[33:00] – Nina has shown how the US dietary guidelines had no robust science to back them up. The results of the guidelines speak for themselves: we are seeing epidemics of obesity, heart disease and diabetes. Was the HPCSA case against Prof. Noakes really an attempt to muzzle him about sugar and the misinformation about healthy fats?

[37:13] – Good scientists will change their mind when confronted with new evidence. Marika explains how the cognitive dissonance theory might explain why the people behind the complaint did what they did. There is also the role of vested interests of companies (such as drug companies that produce statins).

[39:10] – Dr. Malcolm Kendrick wrote an article on the difficulties doctors who support LCHF diet face; Malcolm is extremely knowledgeable on the subject of heart disease.

[41:48] – How the HPCSA hearing became known as the “banting for babies trial” but wasn’t actually about infant nutrition.

[44:20] – HPCSA built a large part of its case on a secret report written by Prof. Esté Vorster from North West University (leaked to Prof Tim Noakes’ defence team by accident). She wrote the S. African guidelines to make starches the basis of all meals based on rationalisations vs evidence.

[53:43] – Marika wondered about the medical doctors, dieticians and food agencies who are behind the fight against Prof Tim Noakes and found an excellent Russell Greene’s investigative journalism article that listed them and connected all the dots.

[54:30] – How the International Life Sciences Institute of South Africa (ILSI) is a proxy for Coca-Cola. Coke has a history of hiding behind non-profit organisations, like the exposed and closed down Global Energy Balance Network, to downplay the dangers of sugar in obesity and lifestyle diseases.

[56:36] – What happens now after the not guilty verdict, which has completely vindicated Prof. Noakes. Will this change anything in terms of dietary advice or will inconvenient evidence continue to be ignored.

[1:00:56] – For more information visit Marika’s dedicated page featuring all her writing on this case: (She is also going to be co-authoring a book with Prof. Tim Noakes on the full case).